Paul Sloan (who co-wrote the tapestry of action-flick cliches that is the screenplay) stars as a military man-turned-“self-made superhero” called the Vigilante, and back to reprise their roles with Sloan are, Kevin L. Walker (a deadly soldier/hero named, “the Kid“) and Jason Mewes (as “Mike Hanover”). (Some crimefighters use secret identities, but whenever villains capture this one, a big V-shaped scar on his torso makes the whole “I’m just Bruce Wayne!” act infeasible.) 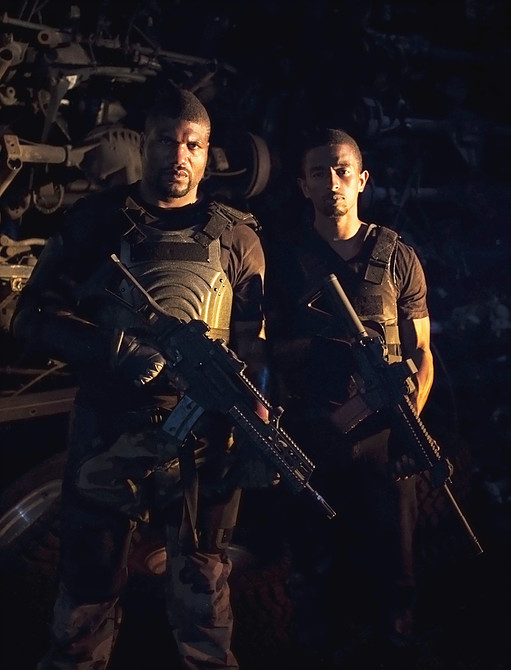 The Vigilante’s nemesis, Andreas (Arman Nshanian), is the kind of drippingly affected villain who can’t do anything bad unless he’s whisper-singing along to an aria, relishing a butterfly’s captivity under a magnifying glass, or kissing the silver tip of his walking stick.

Andreas has imprisoned the Vigilante in Puebla, Mexico, necessitating a rescue. So it’s time to call a hardened crew of mercenaries with names like Wolfman, Tex-Mex, Hollywood and The Geek. You now know as much about those four as you’ll know when the credits roll, except that one of them (no spoilers here!) smokes a cigar. They’re hired by someone called Gay Barry, who wears bow ties to military raids and does his homework on a CGI computer system he bought used from the set of Minority Report.

As the YouTube videographer who helped popularize the Vigilante’s exploits, Mewes chimes in with a chummy voiceover from time to time, trying to explain what’s going on. But does anyone listen? The truth is, if you could strip out the douchey dialogue and tedious story elements, the remaining barrage of action sequences might suffice to keep the least demanding genre fans awake until they remember there’s an unwatched Expendables sequel in the Netflix cue.