A study that tested 863 adults for antibodies to COVID-19 suggests it’s infected more people in L.A. County than the official numbers show.

With the preliminary results released today, researchers estimate that somewhere between 220,000 and 440,000 Angelenos have already been infected. That’s a lot more than the 13,816 cases confirmed so far.

With the substantially higher estimate of cases, that suggests the mortality rate for the county is much lower than the current 4.4%, said L.A. County Public Health Director Dr. Barbara Ferrer. She pegged it at closer to .1% or .2%.

“I think if there is a part of this that’s hopeful for us, it is that the mortality rate now has dropped a lot,” she said.

The study suggests the vast majority of people in the county have probably not been infected.

“What the findings show is that only 4% of our population has been infected,” said USC’s Dr. Neeraj Sood, the study’s lead investigator. “Which means we are very early in the epidemic and many more people in L.A. County could potentially be infected.”

Noting that the sample size for the study was relatively small, Ferrer provided some early estimates of who was most likely to have been infected. Men, for instance, had a higher prevalence of infection than women (6% for men vs. 2% for women). As for demographics, she said the breakdown for those who tested positive was: 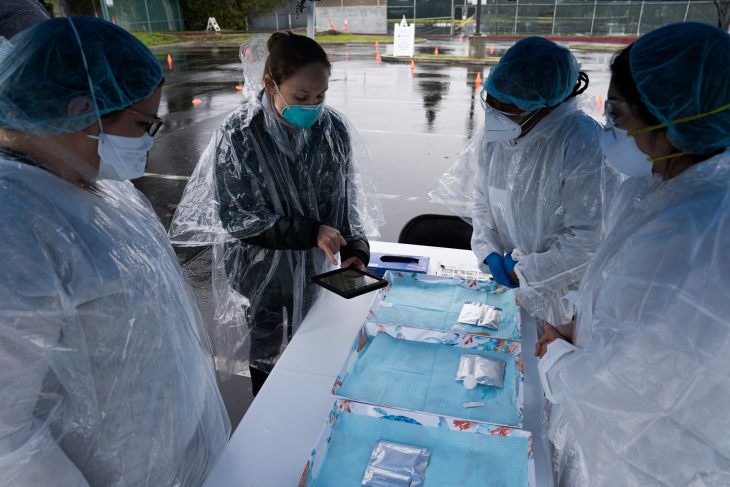 L.A. County is currently averaging about 50 COVID-19 deaths a day, according to the Department of Public Health’s Chief Science Officer, Dr. Paul Simon. He noted that COVID-19 is currently killing more people in the county than any other cause, including coronary heart disease.

“So while I report every day that we have thousands and thousands of people who have tested positive for the coronavirus, the syrology tests let us know we have hundreds of thousands of people that have already developed antibodies to the virus because at some point over the last couple of months, they have been infected with COVID-19,” L.A. County Public Health Director Barbara Ferrer said.

That doesn’t mean they are immune or cannot be reinfected, Ferrer said, adding that more studies are need to confirm that. Ferrer said the results reinforce the need for social distancing. “We need to assume that any point in time we can become infected,” Ferrer said.

In L.A. County, researchers on April 10-14 sampled the blood of a random population of 863 area residents at six testing sites.

Researchers found that between 2.8 percent and 5.6 percent of the county’s population has been infected at some point. That translated into a preliminary estimate 28 to 55 times higher than the 7,994 confirmed cases at the time of the study, officials said.

The next wave of syrology testing is scheduled in about three weeks. These tests seek out antibodies — which reveal who has had the virus, whose immune system had fought it off, or was in the process of fighting it off. They are not the same as virology tests, which use a swab of the saliva or nasal passage to collect a specimen, which is then tested for presence of the virus.

Antibodies are the body’s crime fighters, binding to alien invaders in your blood. They attack antigens — like viruses — with the hope of destroying them. And ultimately, researchers think they hold valuable insight into how the body fights off COVID-19.

Ultimately, if the numbers hold up over a series of rounds, they could have implications for how soon social distancing orders are eased, and when a humbled economy can reboot.

County Public health officials mused about a future where perhaps more frequent antibody testing could help loosen and tighten restrictions over time, a kind of “dance that might have to occur over 12 months,” said Dr. Paul Simon, chief science officer with county.

The county has teamed up with USC Price School of Public Policy and Lieberman Research Worldwide for the antibody study.

The Stanford researchers said that their work revealed that between 48,000 and 81,000 people in Santa Clara County may have been infected by the coronavirus by early April — 50 to 85 times more than the number of official cases at that date.

Stanford’s low-end estimate of Santa Clara County cases is nearly double the confirmed total — 28,000 — for the entire state of California. The study estimated 2.5 percent to 4.2 percent of residents here carry antibodies to the pathogen, a marker of past infection that suggests it may be safe for them to go back to work and school.

A heated debate, however, has erupted over the Santa Clara County research. Critics claim the study’s methodology is dangerously flawed and question the political motives of the Stanford-led team.

Others have pointed to the study as proof that COVID-19 is merely a partisan-driven flu hoax, as protests broke out this weekend over frustrations with the shutdowns, including two in Orange County.

In response, on Sunday, the study’s authors said they are planning to soon release a detailed appendix that addresses many of the criticisms and incorporates many of the suggestions into the paper itself.

“We have received a vast number of constructive comments and suggestions on our working paper over the past couple of days,” said Dr. Jayanta Bhattacharya, professor of medicine at Stanford University.

“This is exactly the way peer-review should work in scientific work, and we are looking forward to engaging with other scholars as we proceed in this important work,” he said.

In Santa Clara County, researchers used social media posts to seek 3,300 participants, which critics say assured that pool wasn’t demographically representative of the population. Researchers say they adjusted their numbers based on that fact.

In LA County, a market research team was hired to gather those tested, so they would be more demographically representative of the county’s residents, said Dr. Neeraj Sood, professor & vice dean for research and faculty affairs at the USC Price School of Public Policy.

Sood said he was confident in the integrity of the L.A. County tests, and that researchers were accounting for any false positives and negatives. He also cautioned putting too much weight into the idea of a reduced mortality rate. That rate, under the new findings, falls drastically from where it was hovering — around 4%. Ferrer said that was good news, because it means 95% of the rest of the population survives.