Blockchain is a disruptive technology that’s poised to change the world and have a major impact on a number of industries in the coming years. As this relatively new tech continues to gain momentum, there has been a sharp increase in the number of blockchain-related opportunities popping up.

Since 2015, the number of blockchain-based jobs has grown by over 550%. Additionally, Google Trends shows a significant increase in interest when it comes to blockchain courses. 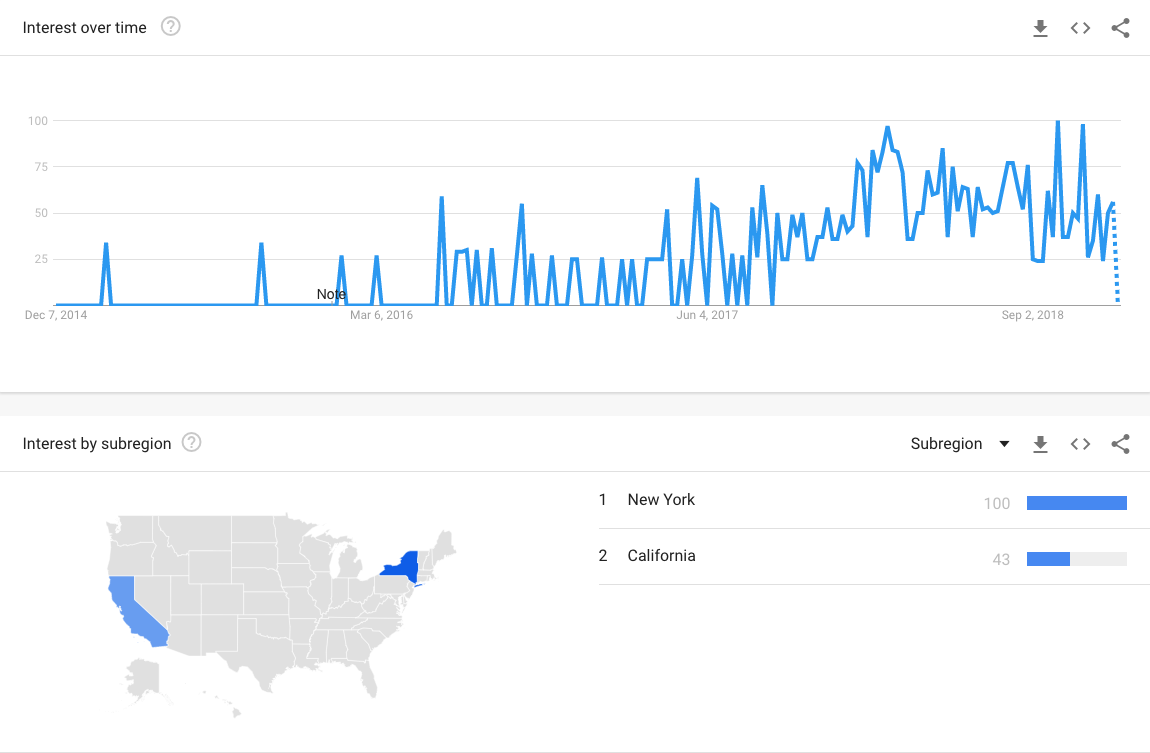 Given the interest from potential employers and students alike, some of the most prestigious academic institutions in the world are indeed offering blockchain/cryptocurrency courses and, in some cases, even degrees.

The leading universities offering undergraduate degrees in blockchain are:

Some of those institutions offering their students an opportunity to learn about this transformative, new technology are:

One university that’s leading the blockchain charge is Stanford. Established back in 1891; Stanford is an institution known for its superior academic reputation – so much so that it’s often mistaken for an Ivy League school. Stanford, not only has roughly ten (10) blockchain-related courses but they also recently launched their own Center for Blockchain Research.

“The Center for Blockchain Research (CBR) is a focused research effort on crypto-currencies and blockchain technologies. The center brings together engineering, law, and economics faculty, as well as post-docs, students, and visitors, to work on technical challenges in the field.”

“Cryptocurrencies and Blockchain Technologies” and “Cryptography” are among the classes offered there. The Center also includes workshops, conferences and more. This initiative will be led by Don Boneh; a computer science professor who is also an expert on cryptography.  Boneh believes that “Stanford should be at the forefront of efforts to improve, apply and understand the many ripple effects of this technology.”

Despite the fact that Cornell has been around since 1865, it still the youngest of the Ivy League schools. The alma mater of the Office’s Andy Bernard is also an influential research university and a leader in computer science. Given its reputation, it should come as little surprise that the school offers a curriculum that features around nine blockchain-related courses.

“Introduction to Blockchains, Cryptocurrencies, and Smart Contracts” is an example of one of the many classes available at Cornell.

Moreover, at least according to Trustnodes.com, Cornell is the best university to study blockchain tech.

“If you’re into computer science with an interest in blockchain technology, the best place to go is Cornell if you can study under Emin Gün Sirer. The professor has a deeper understanding of blockchain technology than probably anyone else, including some core protocol developers who spend their time developing public blockchains. He is one of the very few in this space who can see what others can’t, and some even call him a genius.”

The University of Illinois At Urbana- Champaign

With its main campus located in Illinois’s twin cities of Champaign and Urbana; this world-renowned university has been in existence since 1867. In the 20th-century the University of Illinois At Urbana- Champaign was considered a pioneer in the field of Computer Science and is credited with building some of the first digital computers. The school is also the home of the National Center for Supercomputing Application (NCSA), as well as the fastest supercomputer on a university campus.

These days, UIUC even has their own Decentralized Systems Labs. The Lab’s goal is to build resilient public infrastructure for the world’s data. In their own words:

“The theme of our work is decentralization: Inspired by peer-to-peer networks and cryptocurrencies, we build distributed systems for broad applications, that resist attacks while minimizing their reliance on trusted external parties. Our approach is multidisciplinary, combining methods from distributed computing, cryptography, programming languages, network measurement, and mechanism design.”

“Applied Cryptography,” “Smart Contracts and Blockchain  Security” and even “Cryptocurrency Security “are some of the classes available at UIUC.

The University of Nicosia

UNIC is the largest university in the country of Cyprus. The college opened in 1980 and currently has about 12,000 students enrolled –from roughly 70 different countries.  What makes the school unique is that it’s that it offers the first master’s degree in digital currencies.

Those perusing a degree in crypto will take classes like “Introduction to Digital Currencies,” taught by industry leaders like Andreas Antonopoulos. Moreover, students can even pay their tuition using Bitcoin – as UNIC is the first University to accept the popular digital currency. — Individuals looking to pay their tuition using fiat currency can expect to spend about $13,857 (USD).

The Massachusetts Institute of Technology is a private research university that opened its doors in 1861. The school is considered a leader in artificial intelligence and open-source programming. Recently, MIT has also taken an interest in becoming a pioneer in the field of blockchain tech.

With their Media Lab’s Digital Currency Initiative, MIT is doing their part to help develop this intriguing new technology. The Initiative is spearheading research projects, papers, and even provides support for the school’s blockchain groups.

According to the Initiative’s mission statement,

“The goal of the DCI is to bring together the brightest minds at MIT and elsewhere to conduct the research necessary to support the development of digital currency and blockchain technology. Together with collaborators at other universities and research institutions, we are working with interdisciplinary groups of faculty, students, and research scientists to author research papers, run pilot use cases of the technology, and develop relevant open-source software.”

In 1838, what is now known as Duke University, was founded by a group of Quakers and Methodists. Since that time, the North Carolina-based institution has gone on to become a collegiate powerhouse – especially in fields like technological research.

The university offers a course called “Blockchain and Innovation,” which is free for all undergraduate students.

Like some of the other schools we covered, Duke also has their own blockchain lab. The Duke Blockhain lab is “a student-run organization dedicated to empowering students and professors with the tools to revolutionize and improve their respective fields through blockchain technology.”

The Lab hopes to “Establish Duke as a leader in blockchain research and innovation.”

Rounding Out The Field

Given that forty-two percent of world’s top 50 universities offer at least one blockchain course, it would be far too time-consuming to cover them all.  With that being said, there are still a few more well-known schools that may be of interest to those in search of opportunities to learn more about blockchain tech. Some of those are:

In the United States

Given that blockchain has only been around since 2008, the fact that almost half of the world’s top colleges are offering classes on it is speaks volumes. As this fascinating new tech continues to grow in popularity, it’s likely that even more, academic institutions will be adding blockchain courses to their curriculums.