As black lives matters protest erupt around the world, many ask what about those still stuck in the slave trade, in the year 2020?

By the time his Libyan captors branded his face, Sunday Iabarot had already run away twice and had been sold three times.The gnarled scar that covers most of the left side of his face appears to show a crude number 3. His jailer carved it into his cheek with a fire-heated knife, cutting and cauterizing at the same time.

Iabarot left Nigeria in February 2016 with a plan to head northward and buy passage on a smuggler’s boat destined for Europe, where he had heard from friends on Facebook that jobs were plentiful. The journey of more than 2,500 miles would take him across the trackless desert plains of Niger and through the lawless tribal lands of southern Libya before depositing him at the southern shore of the Mediterranean Sea. He never made it. Instead, he was captured the moment he arrived in Libya, then sold to armed men who kept a stable of African migrants they exploited for labor and ransom.

The brand on his face, he says, was both punishment and a mark of identification. Fourteen other men who attempted to escape the fetid warehouse where they had been held as captive labor in Bani Walid, Libya, for several months in 2017 were similarly scarred, though the symbols differed. Iabarot, who is illiterate, wasn’t sure if they were numbers or letters or merely the twisted doodles of deranged men who saw their black captives as little more than livestock to be bought and sold. “It was as if we weren’t human,” the 32-year-old from Benin City, Nigeria, tells TIME. 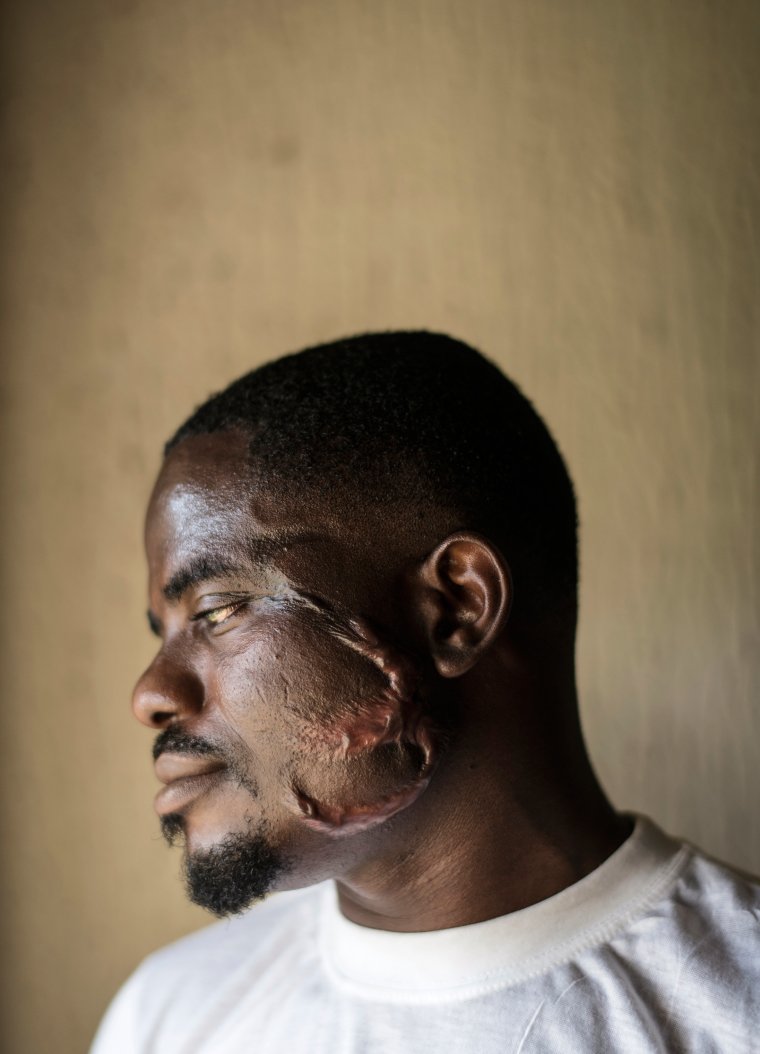 Sunday Iabarot, 32, shows the scars on his face made by a Libyan trafficker who held him captive; he now lives in a shelter in Benin City, Nigeria
Lynsey Addario for TIME

Iabarot is among an estimated 650,000 men and women who have crossed the Sahara over the past five years dreaming of a better life in Europe. Some are fleeing war and persecution. Others, like Iabarot, are leaving villages where economic dysfunction and erratic rainfall make it impossible to find work or even enough to eat. To make the harrowing journey, they enlist the services of trans-Saharan smugglers who profit by augmenting their truckloads of weapons, drugs and other contraband goods with human cargo.

But along the way, tens of thousands like Iabarot are finding themselves treated not just as cargo but as chattel and trapped in a terrifying cycle of extortion, imprisonment, forced labor and prostitution, according to estimates by the International Organization for Migration (IOM) and the U.N. Office on Drugs and Crime. “They are not only facing inhuman treatment. They are being sold from one trafficker to another,” says Carlotta Sami, southern European regional spokesperson for UNHCR, the U.N. refugee agency. Essentially, they are slaves: human beings who have been reduced to being possessions with a fixed value, based on assessments of the kind of income they can accrue to their owners as targets for extortion, as unpaid labor or—as is often the case with women—prostitutes.

Slavery may seem like a relic of history. But according to the U.N.’s International Labor Organization (ILO), there are more than three times as many people in forced servitude today as were captured and sold during the 350-year span of the transatlantic slave trade. What the ILO calls “the new slavery” takes in 25 million people in debt bondage and 15 million in forced marriage. As an illicit industry, it is one of the world’s most lucrative, earning criminal networks $150 billion a year, just behind drug smuggling and weapons trafficking. “Modern slavery is far and away more profitable now than at any point in human history,” says Siddharth Kara, an economist at the Carr Center for Human Rights Policy. 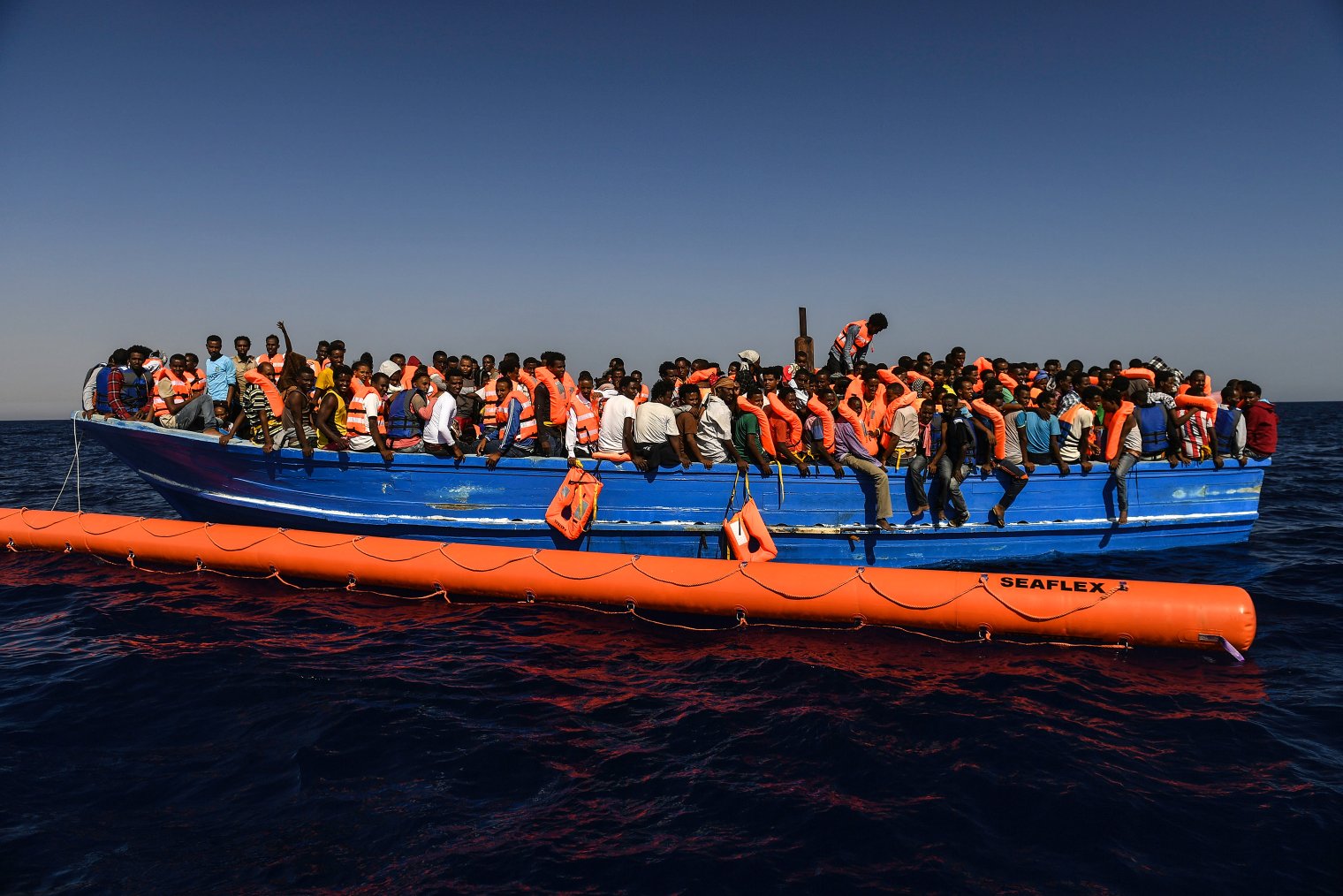 Search and rescue staff and medics, jointly run by SOS Mediterranee and Doctors Without Borders, rescue migrants in the Mediterranean Sea, about 25 miles off the coast of Libya, Aug. 20, 2016.
Lynsey Addario for TIME

The corridor from Africa’s most populous country to its northern Mediterranean shores has proved especially lucrative. As conflict, climate change and lack of opportunity push increasing numbers of people across borders, draconian E.U. policies designed to curb migration funnel them into the hands of modern-day slave drivers. The trade might be most visible in Libya, where aid organizations and journalists have documented actual slave auctions. But now it is seeping into southern Europe too—in particular Italy, where vulnerable migrants are being forced to toil unpaid in the fields picking tomatoes, olives and citrus fruits and trafficked into prostitution rings.

“We no longer need slavers going into Africa to capture their quarry,” says Aboubakar Soumahoro, a union representative who came to Italy from Ivory Coast 17 years ago with the hope of finding a better life. “The rope of desperation has replaced their iron chains. Now Africans are sending themselves to Europe and becoming slaves in the process.”

When Iabarot reached Libya’s southern border, he met a seemingly friendly taxi driver who offered to drive him to the capital city, Tripoli, for free. Instead, he was sold to a “white Libyan,” or Arab, for $200. He was forced to work off his “debt” on a construction site, a pattern that repeated each time he was sold and resold. “If you work hard, you get bread,” he tells TIME from the darkened room of an abandoned hotel in Benin City that the Nigerian government is using to house human trafficking victims rescued from Libya. “If you refuse to work, you are beaten. If you run away and get caught …” His voice trails off. The scar on his face says the rest. 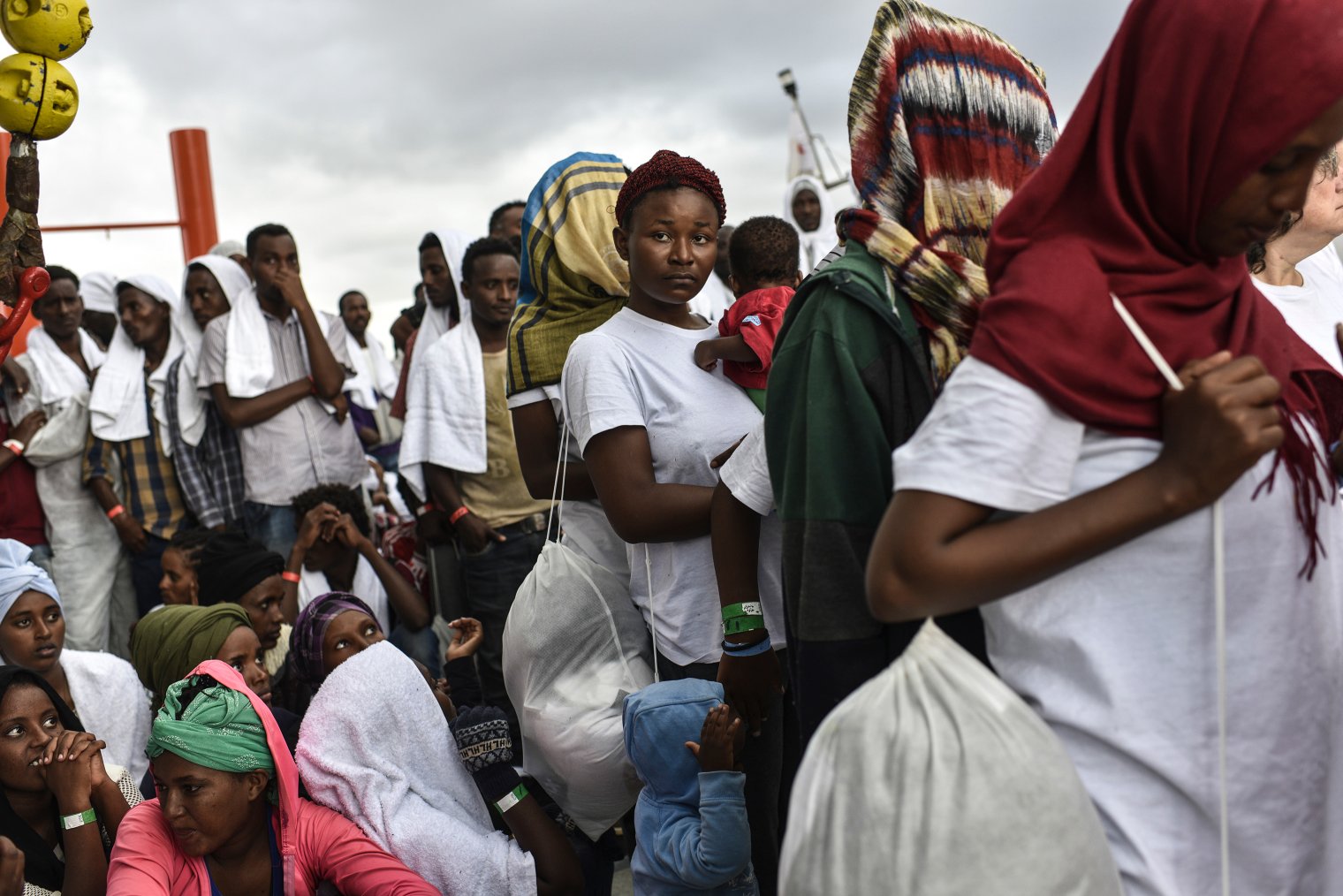 Goodness, 20, holds her daughter Destiny as she waits to disembark at the Catania Port, Sicily, two days after being rescued, Aug. 23, 2016.
Lynsey Addario for TIME

In 2016, the year Iabarot set out from Nigeria, the number of migrants arriving in Italy from Libya spiked to 163,000, prompting a political backlash and a determination to stanch the flow at all costs. In February 2017, the E.U. launched a plan to train and equip the Libyan coast guard to intercept smuggler boats and keep the migrants in detention camps.

Two years later, the arrivals in Italy are down 89%. But the policy has caused a bottleneck on the other side of the Mediterranean and a lingering humanitarian crisis. The IOM estimates that nearly half a million sub-Saharan African migrants are currently trapped in Libya, ripe for exploitation by armed groups and corrupt officials. Julie Okah-Donli, director general of Nigeria’s National Agency for the Prohibition of Trafficking in Persons, went on a fact-finding mission to Libya last year after hearing reports of Nigerians living in “slavelike conditions.” She tells TIME she was sickened by what she saw. “In some of the camps we visited, they had already taken truckloads of the guys to go work on the farms and in the factories for no pay at all. As long as they are in those camps, they are treated like slaves.”

When CNN aired footage of what appeared to be African migrants being sold at a slave auction at a Libyan detention camp in November 2017, the outrage was immediate and global. The U.N. Security Council condemned the “heinous abuses,” the E.U. demanded “swift action,” and French President Emmanuel Macron called for a military rescue operation. 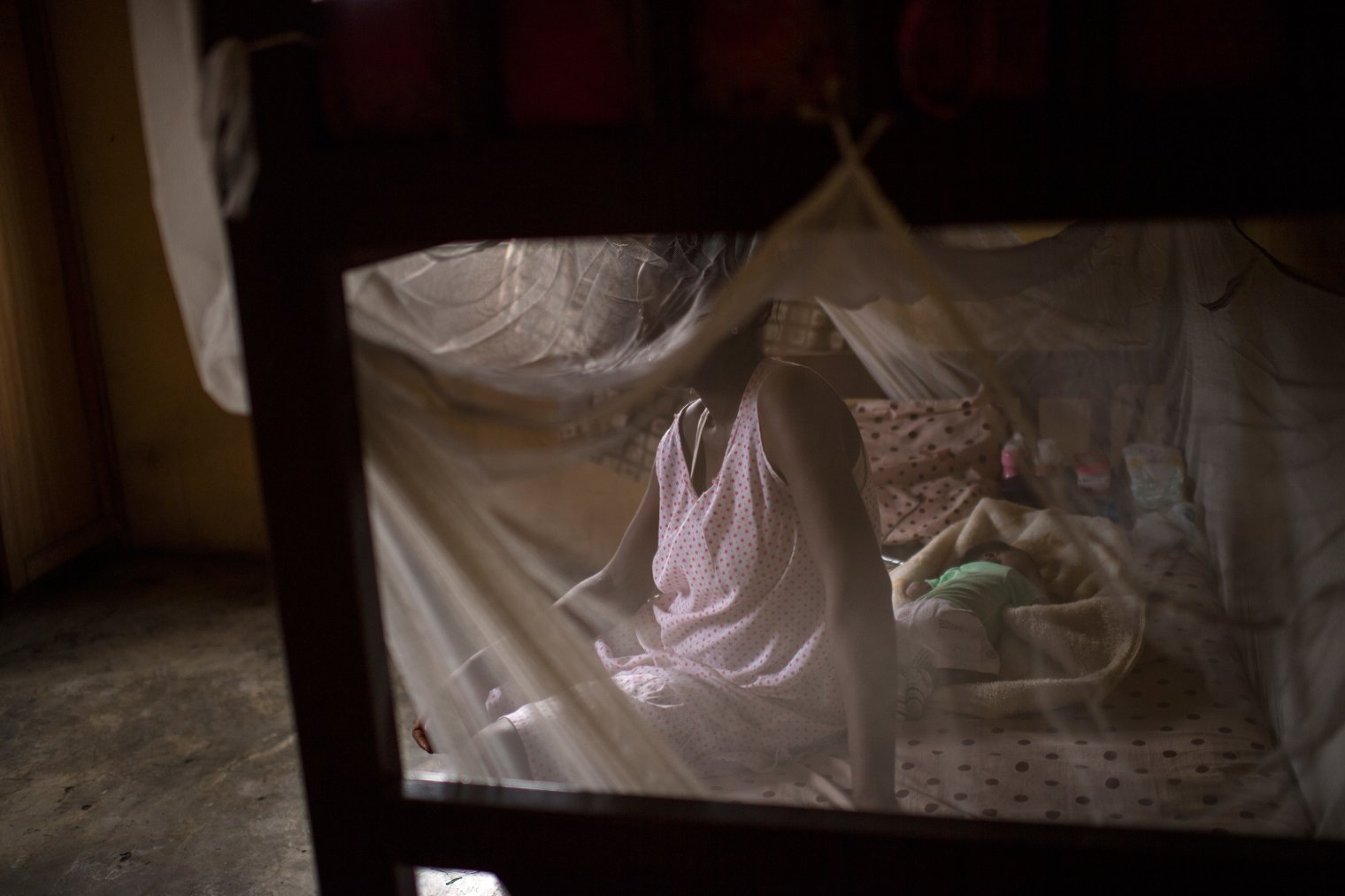 Joy sits with her two-week old daughter in a safe house in Lagos, Nigeria, March 20, 2018.
Lynsey Addario for TIME

Yet just over a year on, little has been done to prevent these abuses. E.U. member states are renewing calls to halt Europe-bound migrants at the Libyan coastline. “The situation for refugees and migrants in Libya remains bleak,” says Heba Morayef, Middle East and North Africa director for Amnesty International. “Cruel policies by E.U. states to stop people arriving on European shores, coupled with their woefully insufficient support to help refugees reach safety through regular routes, means that thousands of men, women and children are trapped in Libya facing horrific abuses with no way out.”

When Joy, a 23-year-old Cameroonian university student, arrived in the coastal Libyan city of Sabratha in August 2017, she thought she was well on her way to France to pursue her dream of becoming a fashion model. But a government-backed militia, emboldened by the E.U. deal to crack down on migrant smuggling hubs, raided the compound where she was staying. She was picked up by a rival group and locked in a room with scores of other women for several months. The women were expected to work as prostitutes, and some were sold to buyers looking to staff their own brothels. Joy, several months pregnant at that time, was largely left alone, she says, but the conditions were “inhumane.”

Joy, who speaks the polished French of an educated woman, says the E.U. directive to curb migrant arrivals not only emboldens corrupt Libyans but also amplifies their deep-seated prejudice against black Africans. “The Libyans understood that if the E.U. doesn’t want blacks to come, it means we are not valuable as humans,” she tells TIME, cradling her newborn, in a shelter for trafficked women in Lagos, Nigeria. “The E.U. is essentially rewarding these militias for abusing us, for raping us, for killing us and for selling us.”