Facebook has been quietly building out its cryptocurrency for over a year, and it looks like that time has been well spent, enlisting the support of some of the most prominent companies across payments, retail, and technology.

As recently reported by The Wall Street Journal, Facebook’s cryptocurrency will be governed by a consortium of firms known as the Libra Association, which includes the likes of Visa, Mastercard, and PayPal. But The Block has gotten its hands on consortium marketing materials and can now report dozens of firms not previously known to be involved, including investors such as Andreessen Horowitz and Union Square Ventures, cryptocurrency exchange Coinbase, and non-profits including Mercy Corps. Calibra, a subsidiary Facebook formed to oversee the social media giant’s crypto efforts, is also among the founding members, according to a source familiar with the matter.

Here’s a full list of the Libra Association founding members, which Facebook is set to officially announce on Tuesday: 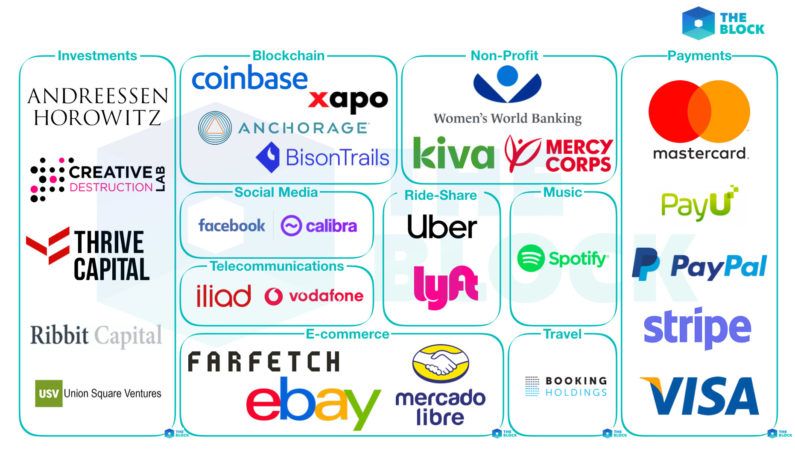 A person familiar with the situation said Facebook charged each member $10 million to manage their own node, which allows members to access and view the network. Originally the company had ambitions to get Wall Street involved, but found a lack of interest among institutional giants like Goldman Sachs and JPMorgan. It is still looking to have 100 members in the governing association, the person said.

Here’s everything we know about the project:

This funding from the consortium members will back the coin, which will be pegged to a basket of currencies.

If successful, Facebook could net $1 billion from the 100 companies it hopes to include in the project. Each of these nodes will also reportedly get a seat in the Libra Association as node operators, sending a representative to the consortium.

Reports of a Facebook cryptocurrency began circulating in May of 2018, when Cheddar reported the social media giant had begun looking into blockchain nearly a year prior. Facebook then announced David Marcus, vice president of its Messenger app and once-member of Coinbase’s board, would lead its blockchain efforts. Prior to Marcus’s appointment, Morgan Beller, a member of Facebook’s corporate development team, was the only employee studying blockchain.

Since then, Facebook expanded the project and talk of a stablecoin increased with each step the company took into the blockchain world.

In May of this year, Facebook registered Libra Networks LLC in Geneva, Switzerland, where it is working on blockchain developments, according to its register. BBC later reported that the company is looking towards a Q1 2020 launch of the coin, and has plans to begin testing it later this year before launching in a “dozen” countries.

Ahead of the launch of its whitepaper, rumored to surface later this month, the company has been posting blockchain job ads. Additional openings were posted this week.

The coin may be used as a payment for messaging apps, among other things. In December, Bloomberg reported the coin would let users transfer money through its WhatsApp messaging service. The New York Times reported a few months later in February of this year that the project had moved to a place where Facebook was discussing selling it to consumers and was in talks with crypto exchanges.

If that’s true, there is a demand, according to a study from LendEDU, which found the coin could entice new users to crypto, and could be bolstered by use through Facebook’s Marketplace feature.

Though a whitepaper has yet to be published, concerns of regulation have already arisen. In the wake of the Wall Street Journal’s report that Facebook was recruiting investors to launch its cryptocurrency, U.S. Senators on the Banking Committee addressed an open letter to Facebook founder Mark Zuckerberg inquiring how exactly the coin would work, among other concerns. The Commodity Futures Trading Commission (CFTC) also told the Financial Times it was in early talks with Facebook and that no formal application has yet been submitted. CFTC Commissioner Christopher Giancarlo said the body is still considering whether a Facebook cryptocurrency would fall under his agency’s jurisdiction.

Facebook has also brought on UK Standard Chartered lobbyist Ed Bowles as its London-based director of public policy to push the cryptocurrency, according to the Financial Times.

Below is our own map of Facebook’s Libra Association, broken out by industry.

Mercado Pago (MercadoLibre) – Argentine e-commerce site incorporated in the U.S. with an online marketplace and auction

Mercy Corps – global humanitarian aid organization that provides support to regions hit by disasters, whether they be economic, environmental, social or political