In the battle of Google Vs. Yelp, there are a few massive reasons that Google Business/Google Reviews are better for business owners. Not only is Google naturally more visible, easier for customers to engage with, there’s also currently less competition, more impact, and more opportunity.

Does that sound too good to be true? Read on to see why you should make getting more Google reviews a high priority.

1. Unlike Yelp, Google Wants You to Ask For Reviews

Believe it or not, Yelp’s official policy is that they don’t even want you to ask for reviews.

Because Yelp knows that you’re not going to ask for a review unless you think it’s going to be a 5 star review.

Google’s policy makes a lot more sense: not only do they want you to ask for reviews, but they even give you a link to make it even easier.

How many times do you “Google” something?.. A lot I’m sure.

If you’re investing in SEO for your business (which you really should be,) Google reviews can give you a strong advantage.

In 2017, Local SEO Guide looked at 200+ local ranking factors, such as “total number of words on page” and “number of photos,” to see which ones had the strongest effect on rankings in Google’s local pack.

Out of the top 10 most influential factors, nine of them involved Google reviews:

Google probably uses these reviews as ranking factors because they offer a direct way to gauge customer satisfaction.

If 100 people say you’re a 5-star business, Google would be crazy not to show your business to shoppers just because you don’t have enough words on your page or enough photos on your local listing.

Ultimately, Google wants to show users results that satisfy their needs, and reviews are one of the best ways they can judge user satisfaction.

So do Yelp reviews impact your SEO too?

Not really. Here’s why:

Since Google and Yelp aren’t exactly friends, Google can only guess how much Yelp works to prevent dirty tricks. If one person leaves ten reviews from ten different accounts on Google, Google should know about it, because Google can see things like their IP and if they’ve recently visited the business. But if someone sets up ten Yelp accounts to post fake reviews, Google can only hope that Yelp do something about it.

Ultimately, they can’t trust it.

That’s why Google should, and does, trust their own reviews more.

What happens when you rank for a great keyword but nobody clicks on your site?

You don’t get any business! 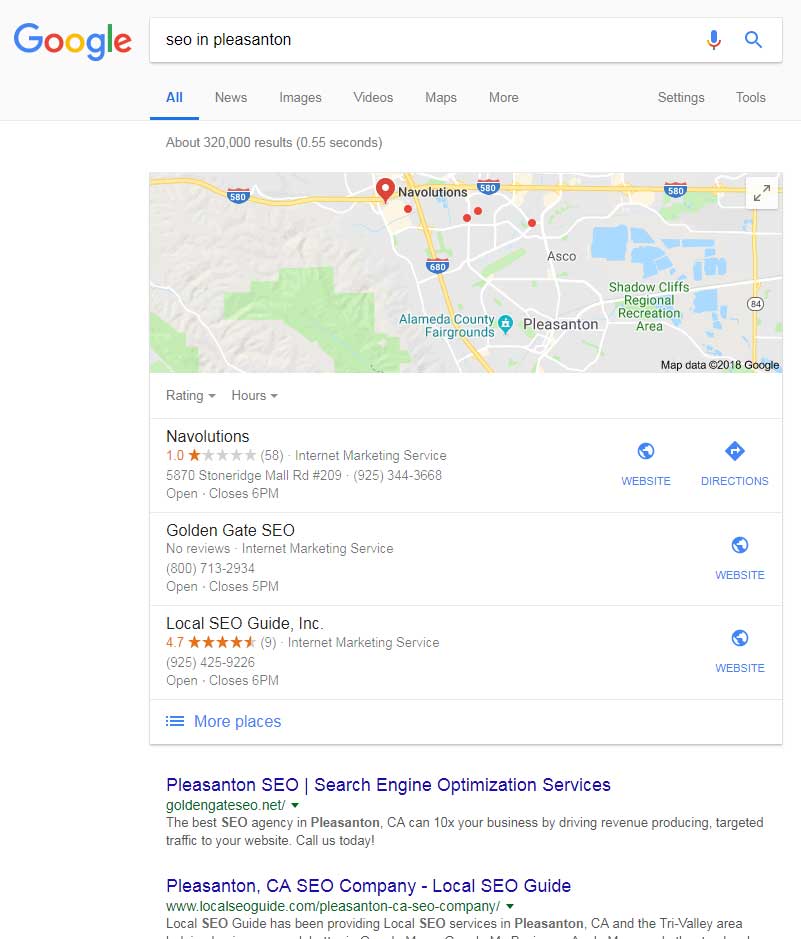 (Note: this screenshot may have been edited just a little bit. Click here to see the real search.)

While Navolutions may be the top-ranked company, they also have a 1-star average. What’s even worse is that they have 58 reviews—not only do they suck, but everyone agrees that they suck.

Local SEO Guide, meanwhile, doesn’t seem to be doing so bad. While they’re only ranked third place, they also have a healthy 4.7 star average with 9 reviews. Even if you don’t pay any attention to the numbers, Navolutions looks pretty bad and Local SEO Guide looks pretty good.

Long story short, growing your reviews is a great way to earn clicks & calls, even if you’re not the top ranked business.

4. It’s Easier to Bury a Bad Review than Remove It

Removing a bad review from Google is tough.  While anyone can report a fake negative review, getting Google to actually remove it can be much more complicated. Get ready to contact their support line, provide evidence, and argue your case.

The truth is that no one expects you to have a perfect record, and having a few bad reviews can actually be a good thing. All you need to do is earn a lot more good reviews than bad ones.

5. Google Reviews Don’t Get Filtered with a ‘Centralized’ approach Like Yelp Reviews

If you leave a review on Yelp, there’s a very good chance that you’ll never see it again. Businesses with large amounts of reviews, typically have even larger amounts of “unrecommended” reviews. Yelp loves filtering out reviews that they deem aren’t real, honest, or conforms to their standards. A lot of real reviews get chucked.

Many speculate this is intentional to keep clients constantly chasing new reviews, and even potentially buying ads to chase new reviews.

You won’t have that problem on Google. Google doesn’t remove a lot of reviews for no reason, and if you’re worried about getting too many Google reviews at once, don’t be.

Stick with Google and you’ll get to keep your happy customers and your reviews.

After polling more than a thousand users, Brightlocal found that 85% of people trust online reviews as much as personal recommendations. Meanwhile, 73% of consumers also said they trust a business more if they have positive reviews.

No matter what you personally think about online reviews, the people have spoken.

So why does Google get the edge here?

Because Yelp’s trust issues are much more public.

It’s not hard to find fairly candid discussions about people writing fake Yelp review for cash, whether or not you can pay Yelp to remove bad reviews, and whether or not Yelp sued South Park for slander. Add in a borderline abusive sales staff, a review filter that doesn’t seem to make a lot of sense, a childish CEO and a troubled business model, and it’s a wonder that they’ve made it this far.

At least for now, we think that a review on Google could carry more weight than a review on Yelp in the future.

7. You Can Leave a Google Review from Any Google Account

If someone wants to leave a review on Yelp, they’ll need a Yelp account. They’ll also need a few other friends and reviews if they don’t want it filtered out. Unfortunately, that rules out a lot of people.

Meanwhile on Google, anyone with a Google account can leave a review. That means anyone who has ever logged into Gmail or YouTube is good to go.

8. The Competition is Lower on Google

According to their factsheet, 184 million reviews have been posted on Yelp to date. For a long time, it was the go-to place to review and research small businesses, so businesses fought hard to grow their reviews.

With that in mind, check out your direct competition on Google. Chances are good that your big multi-million dollar competitor still has fewer than ten reviews, simply because they don’t know any better. Do what it takes to beat their reviews and soon you could be beating their sales, too.

What are your thoughts?