Images have begun to circulate around twitter from users indicating that the Chinese Central bank is testing its anticipated digital yuan.

WeChat users are believed to have gained access to the screenshots on Tuesday this week. Images have since been shared to Twitter in a series of tweets from Matthew Graham, the CEO of Sino Global Capital, a tech investment firm that works with mainland Chinese interests. Graham says he has also seen the app firsthand.

According to Bloomberg that China’s central bank has given the green light for some state-owned commercial lenders to run trials of its digital currency. According to the report, the banks are conducting internal, hypothetical-use tests of the digital currency and testing conversion between cash and digital money, account-balance check, payment and remittance.

The images appear to show how the CBDC, known in China as the DC/EP (digital currency/electronic payment), is being tested by the Agricultural Bank of China, one of the four state-owned banks believed to be piloting the token.

*need to be on whitelist to register
**not sure if geofenced pic.twitter.com/sN7oa9P94F

He then went on to taunt and disrespect every American by mocking America’s position with the COVID-19 pandemic, and basically the rest of the world. At the time of writing there are 34,386 confirmed deaths in America and 143,802 worldwide. 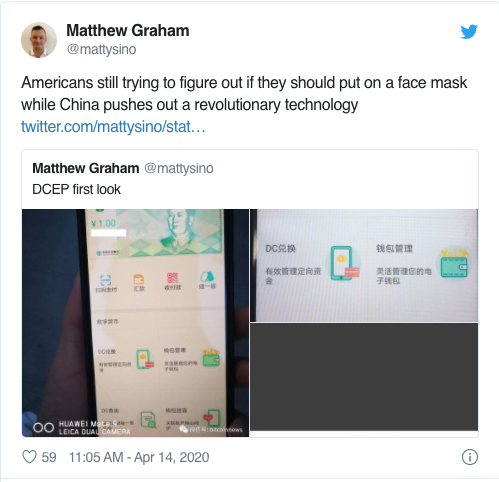 The pilots are believed to have begun in Shenzhen and Suzhou, but WeChat users have stated that they may have also been extended to Xiongan and Chengdu.

Seems that testing wallet app is available for download. 4 cities will be available for the trial to begin with, including Shenzhen, Chengdu, Suzhou and Xiongan. Interesting that Xiongan, the newly state-level new area is one the first batch of the trails cities. #DC/EP pic.twitter.com/960poROFIo