Public records at the Pasadena, CA courthouse show that Walker has filed a lawsuit for $10,000, stating aspiring actress Alexis B. Santiago materially breached her contract, by working for Walker for s few months, and then violating anon-compete clause in her contract which prohibited “opening a competing business” and/or stealing his company secrets or “secret sauce.”

Walker field the lawsuit on 01/27/2020 after Santiago refused to respond or cure the breaches.

The honorable Beverly Bourne was to preside over the matter however, Judge Pro Temp. Stephany Yablow ultimately presided over the matter on 03/11/2020 and found Santiago to be liable, thus issuing a judgement against her for $5,115.00.

The initial lawsuit was indeed filed for $10,000 however, given the contract was signed with Walker’s company “The Creation Station Studios,” and not himself, Walker’s complain was amended and his company name was replaced as the “plaintiff.” As a result, the maximum pursuable by a company is small claims in the state of California is, $5,000. 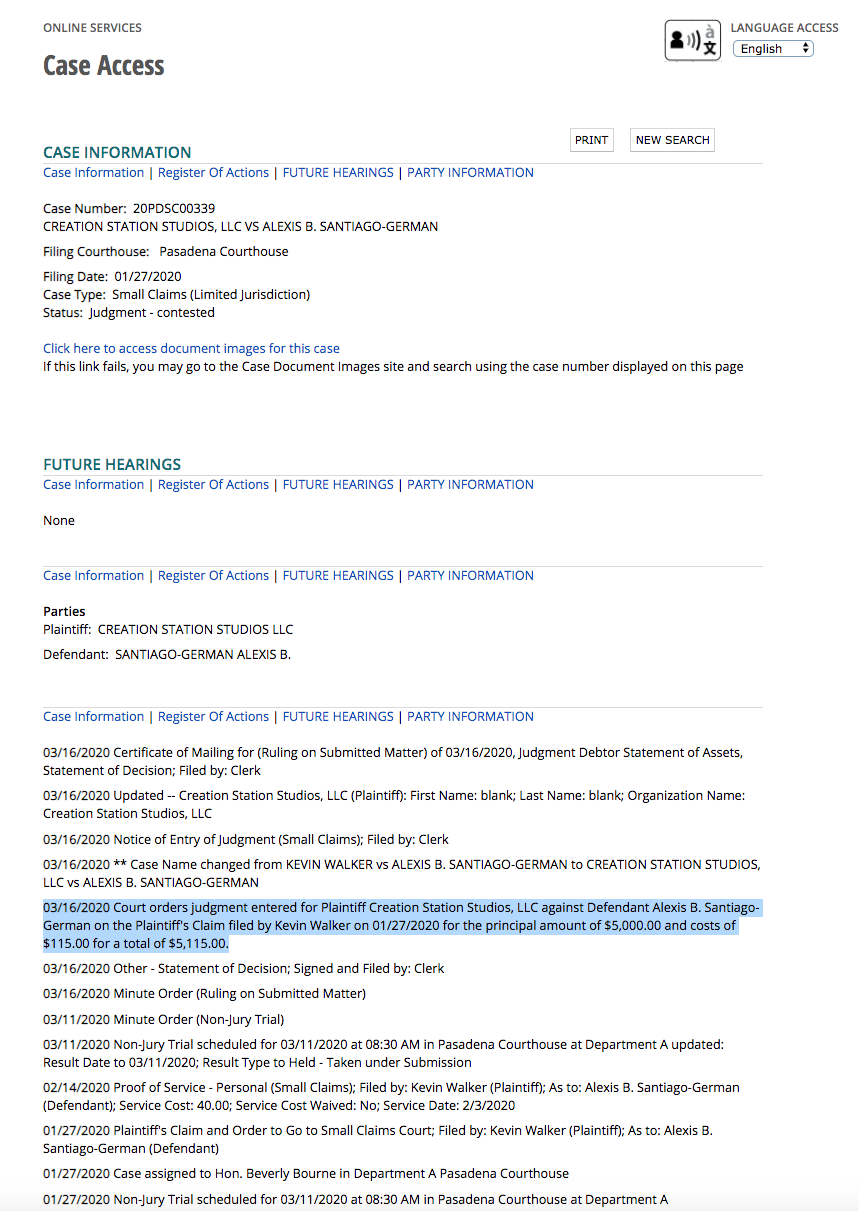 Santiago argued that, business code section 16600 renders all noncompetes void, and that she should not have to honor her contract with Walker.

Walker argued in his filing and in person that:

Miss Santiago-German has also publicly displayed the exact type of equipment we use (See “Exhibit J”). Something we have not done since out inception in 2015, in an effort to maintain my company’s “secret sauce,” and protect my professional interests.

My business client flow has slowed since July of 2019, as our analytics and data, stretching back to the company’s inception, proves.

Taking into account that Miss Santiago-German has stolen/poached several clients from me, it’s very obvious she has also caused harm by taking revenue from me.

For the court’s reference and consideration, In Ixchel Pharma LLC v. Biogen, Inc., the district court ruled that section 16600 does not apply outside of the employer-employee context, and dismissed the case.

In Quidel Corp. v. Superior Court, the California Court of Appeal also expressly declined to extend this prohibition against non-competes to circumstances outside of the employment context

Miss Santiago-German has sabotaged my business, shortchanged me and undercut the years of hard work, research, and time I have invested into making the company what it is today.

Miss Santiago-German has caused irreparable harm, and continues to do so, despite being notified of her breaches and violations. “

Santiago tried to seemingly manipulate her way out of the situation again also arguing that the contract was signed with the company “The Creation Station Studios,” and not Walker however, the judge simply amended the complain, as per normal procedures.

This isn’t the first time Walker has had to protect his interests. In October of 2018 Walker sued former employee Gianna Rose Ditullio for $10,000, which resulted in the business closing doors and thousands being paid to Walker in damages. Ditullio stole Walker’s trade secrets and opened a clone of his business and mimicked every piece of equipment he had.

Then most recently Walker also filed a lawsuit against former employee and aspiring actress Karina Noelle Castillo, alleging she too worked for him for 2-3 months, signed a contract, and breached it in various ways, one of those breaches being opening a competing self tape business using all of Walker’s proprietary information.

Oddly enough Castillo breached her contract again, appearing as a witness on behalf of Santiago, practically coaching Santiago through her entire case on how to use Castillo’s defense same defense, that she too believes that 16600 should render the contract void. 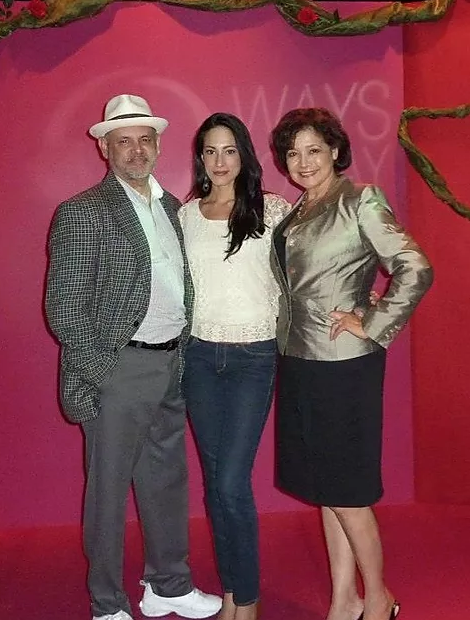 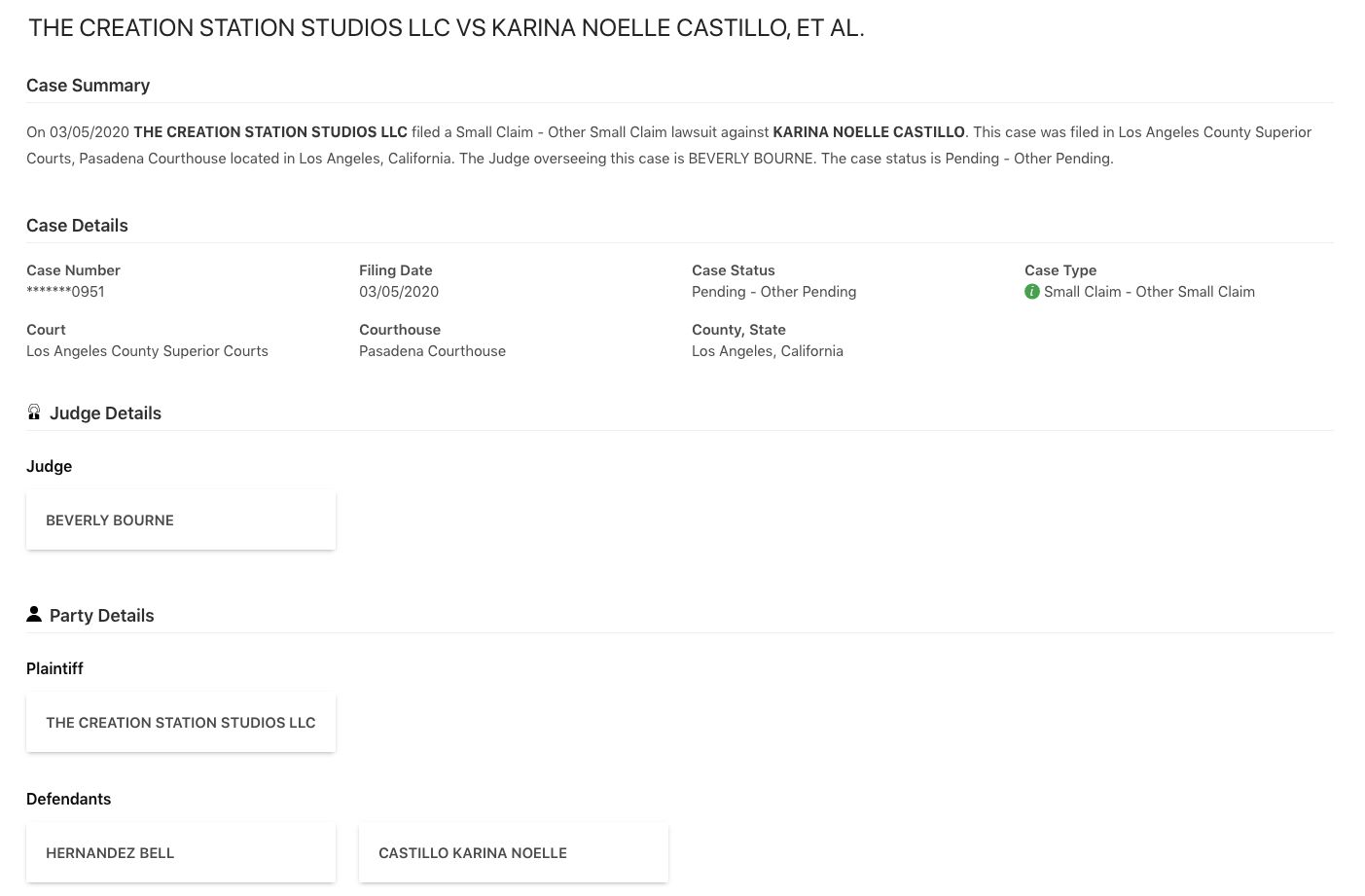 Judge Pro Temp. Stephany Yablow was seemingly baffled by Castillo and Santiago’s confidence in incorrectly citing law, and explained that “law will dictate this outcome.”

” B&P 16600 states: “Except as provided in this chapter, every contract by which anyone is restrained from engaging in a lawful profession, trade, or business of any kind is to that extent void.”

This is not an instance where the contract prohibited defendant from working for a competitor, and defendant did not go to work for a competitor, she started her own company that went in direct competition with Walker. Defendant did not merely engage in a lawful trade or profession when she started her own company, but she used Walker’s trade secrets and confidential information to solicit Walker’s existing clients. Misappropriation of trade secrets is excepted from B&P 16600.

Here, regardless of enforceability of the non-competition agreement, there was sufficient evidence establishing that defendant misappropriated trade secrets when defendant used Walker’s proprietary camera and photo techniques coupled with her soliciting of Walker’s existing clients. Defendant, therefore, is not protected by B&P 16600. Moreover, under B&P 17203, a court may enjoin the use or diclosure of trade secrets under the unfair competition provisions of B&P 17203 which provides for relief against “any person who engages, has engaged, or proposes to engage in unfair competition…” ReadyLink heathcare v. Cotton (2005) 126 Cal.App.4th 1006, 1017. “ 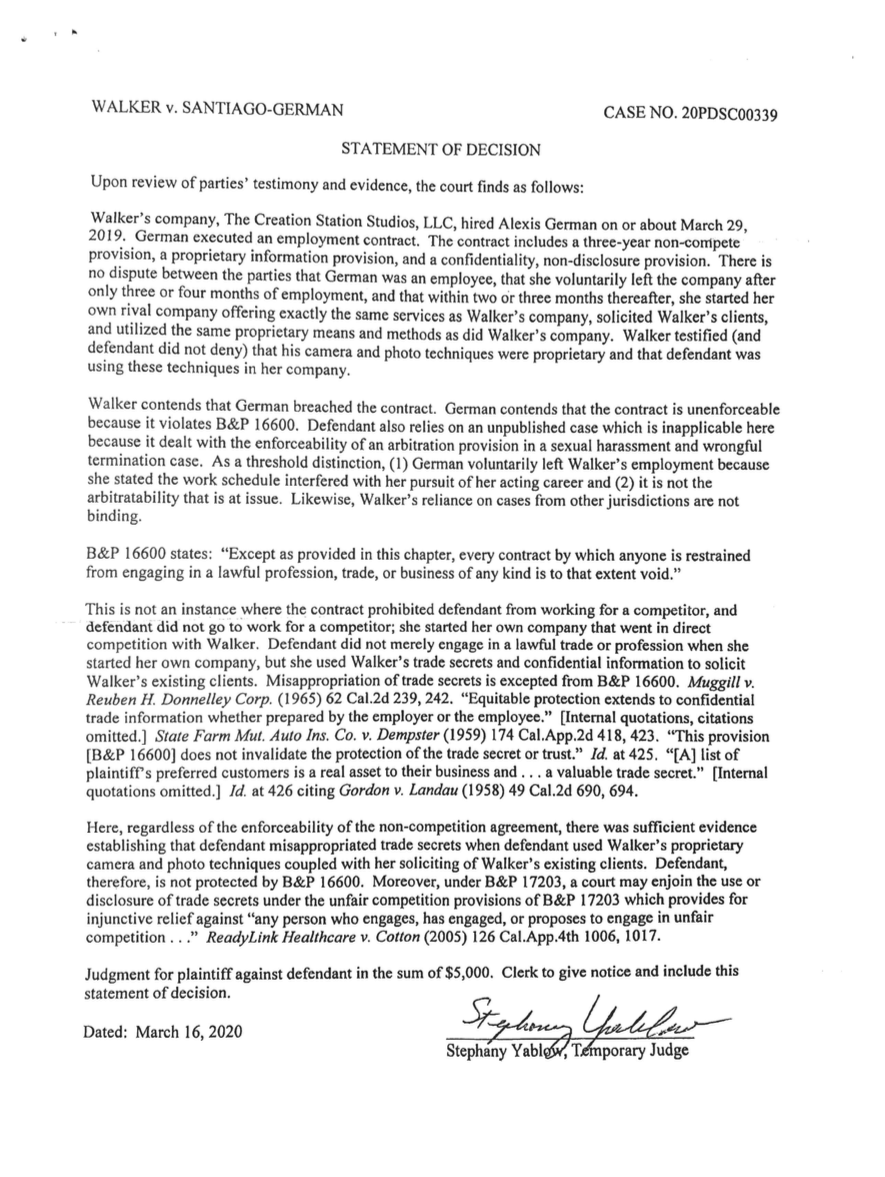 Castillo is also due back in court with her mother Bell Hernandez of “Latin Heat Entertainment” in an seemingly identical case.

Castillo claim her mother randomly thought of creating a self tape business using all of the same equipment, and even the same landlord as Walker, within weeks of working for Walker, and that she “works for her mother,” though that seems extremely unlikely, especially since Castillo listed herself as a “founder” on her own personal website. 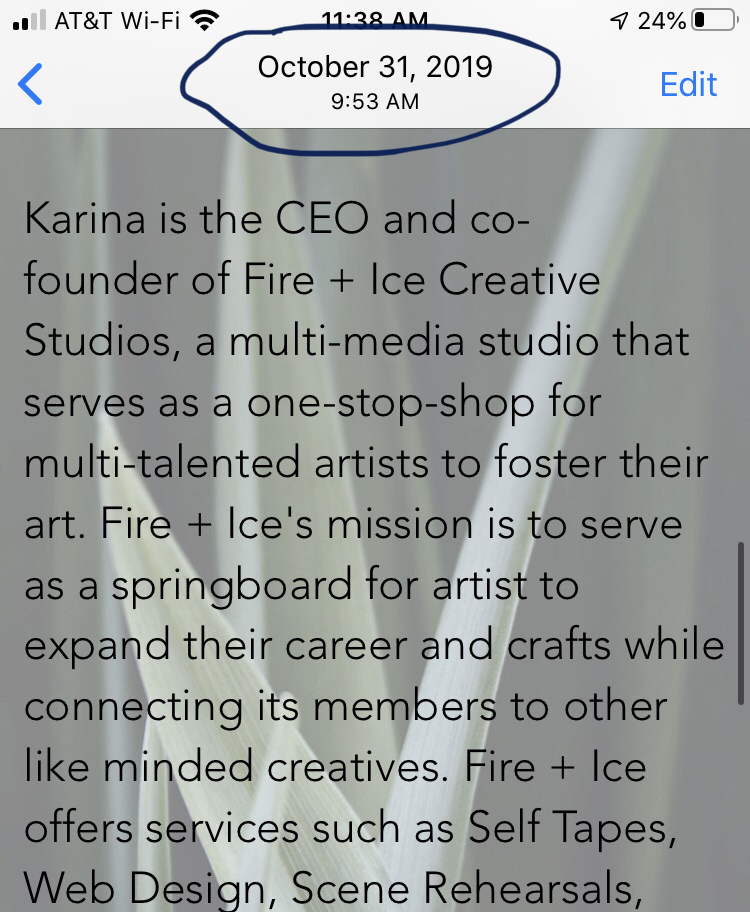